This is a one pot rice recipe that you can customize to your heart’s desire, the only exception is that you must always start with a few basic ingredients. This recipe works, it’s really delicious and a time saver. You basically throw everything in the rice cooker, or pot if you cook rice in pot, and your meal is ready when your rice is cooked. I have tried this recipe three times now and each time with a different slant of ingredients and it always comes out beautifully. It’s sort of like a stone soup, if you’ve heard of that story. Except it’s with a tomato. Except it’s tasty even with just a tomato.

When I decided to give this recipe a try, I was tired and hungry after work, there wasn’t much groceries left in the fridge and I didn’t have the energy to get groceries or cook P and I proper dinner. Desperation leads to openness in trying new things I guess, so I eyed that lovely organic red tomato sitting on my kitchen island. Boy am I glad I gave this recipe a whirl.

My only regret? Not taking more pictures. END_OF_DOCUMENT_TOKEN_TO_BE_REPLACED

END_OF_DOCUMENT_TOKEN_TO_BE_REPLACED

For Christmas eve, we roasted duck for dinner at the in-laws’ place. I thought a different fowl for a change would be nice, instead of the usual turkey. In all honesty, I am not really very fond of turkey. There is the thing with the size of it and getting stuck eating turkey for 2 weeks and then there is the gameyness to it that I can’t appreciate. Duck is delicious, on the other hand.

I bought a 2.5kg frozen Brome Lake duck and it was plenty to feed 4 to 6 people easily with three side dishes and a Scottish Meat Pie (for another post for another day!) that were served that night. Duck is more festive, in my opinion. If you can find goose, even better! This recipe incorporates macerated orange zest, five spice powder and garlic; and it works for any bird you intend to roast.I also stuffed the bird with some good quality pork sausage stuffing. Basically, I just cut open the sausage casing and just pull out the meat into a bowl. For lightness, I have also added some breadcrumbs and some chopped herbs for extra flavour.  I went a step further by coating the duck with a mixture of honey, corn syrup, balsamic vinegar, malt vinegar and red wine for a shiny finish. I wanted to give the duck a nice flavour on the skin and to achieve that glorious dark shellac when it comes out of the oven.

Don’t be afraid of duck. It’s anatomy is no different from a chicken or a turkey for that matter. If you have roasted chicken or turkey, you can do this. It’s really not an intimidating bird to roast at all. In fact, the bird is self-basting because of the high fat content that lives under its skin.

Now, carving it on the other hand was a bitch. But that’s another story for later. This is a recipe for roasting a duck, making it pretty and making a sauce out of the drippings on the pan.

END_OF_DOCUMENT_TOKEN_TO_BE_REPLACED

Hold your breath, this recipe requires 50 cloves of garlic.

This is a very Portuguese-inspired meal where the food is braised to cook with simple supplemental flavorings. I know you probably think that 50 cloves of garlic seem like an overkill but trust me, it is lovely. The garlic flavor was just right, and not overpowering at all. Actually, cooked garlic has a very sweet and mellow flavor and in this dish, it’s really an ode to the garlic. I figured that with the season changing and a piggy bug going around the globe, a little boost to the immune system with some garlicky goodness will do everyone some good. Garlic is high in antioxidants and has natural anti-viral properties that helps us ward off the nasty cold and flu.

So, before I digress further into a health charade, this chicken recipe was taken from Epicurious. I made a little tweak to it by adding a bit of shallots, carrots and instead of fresh thyme, I used what I had; some dried rosemary. It was delicious and simple to make. And it is a crowd-pleaser recipe that I think you ought to give it a try.

Here’s the recipe for Chicken Braised with Garlic and White Wine.

Ingredients:
7lb whole chicken, cut into 8 pieces (you can buy any cuts you want, but I like to dismantle my own chicken)
50 cloves of whole garlic, peeled
2 shallots, minced
2 cups of dry white wine, any brand you like (I picked a mid-level bottle, just don’t buy the extremely cheap wine that tastes like crap. Use wine that you would drink that is not too expensive for cooking. And if you’d like, you can use a Portuguese wine to keep to the theme.)
2 carrots, chopped into large chunks
4 tablespoon of olive oil
salt and pepper

1. Season your chicken pieces with salt and pepper, generously.
2. Heat a large lidded pan with 2 tablespoon of olive oil and sear your chicken pieces until they are browned on all sides. This browning stage is rather important because it gives a lot of flavor.

3. After all your chicken pieces are browned, set them aside and in the same pan add the remaining 2tablespoons of olive oil and throw in your garlic cloves, saute them for a minute on low heat until they are slightly browned.

Add your minced shallots in for a saute until they become translucent.

Oh those 50 cloves of garlic is in there, under the chickies releasing all it’s garlicky goodness.

4. Add the 2 cups of white wine in, and let the liquid come to a simmer. Transfer the chicken back into the pan, throw in the rosemary and carrots.

5. At this point, you have the option to finish the cooking on stove top or in the oven. I popped it in a 350F oven for another 45minutes covered and then another 15 minutes uncovered and i increased the heat to 450F. If you want to cook it on the stove top, cook it covered under low heat for 1 hour.

To serve, I made some greens and mash potatoes to go with it. Spoon the chicken and garlic pieces over the mash potatoes.

Here’s to all it’s garlicky goodness! 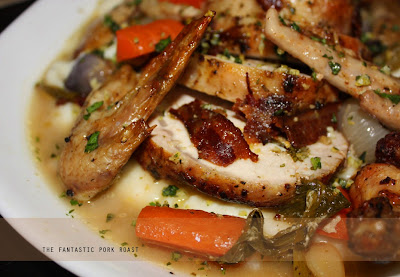 This recipe is every reason, every household should have an oven. This simple and fantastic pork roast dinner is quite effortless and not very time consuming at all. Preparation takes about 30 minutes and then the rest is finished off in the oven 2 hours (1.5hrs + 30 minutes of resting time) before serving time. I would call this the perfect dinner party meal where the host(ess) can play perfect host without fiddling back and forth the kitchen. I call this The Fantastic Pork Roast Dinner; because it’s just superbly easy and a show stopper when you bring it to the table.

I made this for my dad’s birthday along with some side dishes. You will realize a bit of a similarity with this dish to my Misto Roasto dish except that it is without quails or Cornish hens. The pork roast is lined with strips of bacon to keep it moist and flavorful, while the inside is spread with my spicy green pesto so that it perfumes and season the meat from inside out. I tossed in some chicken wings to roast too for a bit of variation on the plate.

So let’s get on with the recipe.

For The Fantastic Pork Roast Dinner, you will need:
(this recipe feeds 8-10 people)

1. Blend all the ingredients under the “to be blended” list until it forms a green aromatic paste. Set aside.
2. Butterfly your pork loin, you can ask the butcher to do it for you or you can do it yourself with a sharp knife at home.
3. Season the inside of the pork loins generously with salt and cracked black pepper. Divide the paste into four parts for each butterflied loin and spread a layer evenly on the inside of the meat. Roll it back up and tie it with a butcher’s string, starting with the center of the meat and then on each end to hold the pork loin rolled up in place. Repeat for the rest of the butterflied pork loins.
4. Sprinkle salt, cracked black pepper and olive oil over the pork loins and rub gently with your finger. Now it’s time to brown the pork loins on a hot pan to seal the meat and give it an extra layer of flavor.
5. Heat pan with some olive oil until very hot. Sear the pork loins for 1 minute on each side or until browned, set aside.
6. In a baking tray, toss the carrots, onions, garlic cloves and celery chunks in and toss with some salt, pepper and olive oil. Place the browned pork loins over the vegetables and cover each pork loin with 4 strips of bacon. Now you can keep this in the fridge until 2 hours before serving.
7. Roast the pork loin, along with the chicken wings if you are adding it, in the oven for 1.5 hours. When it is ready, let it rest for 20 minutes before serving. 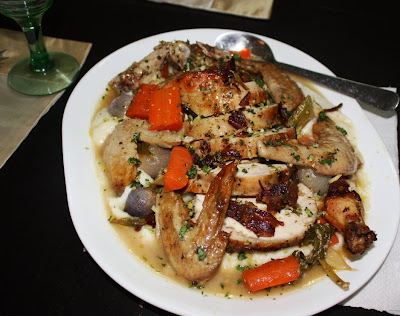 To serve, take off the bacon bits and tear it into small pieces. Cut off the butcher’s string and slice the pork loins into 0.5inch thick slices. Sprinkle the bacon bits over the top and with some chopped parsley.

And there you have it, a fantastic pork roast dinner.