END_OF_DOCUMENT_TOKEN_TO_BE_REPLACED

I love Kaffir lime leaves. They impart a wonderful citrusy flavor and when they’re sliced finely and added to chicken curry, it brings the dish to a whole new level. The lemony scent it gives off in this chicken gulai dish opens up the appetite of even the pickiest eaters.

In case you’re wondering what gulai is, it essentially means curry. But in my understanding when gulai is made at home by my family, it usually has a citrusy tone to the curry with the addition of Kaffir lime leaves, lemongrass and/or juice of pineapples. This chicken gulai, besides the Kaffir lime leaves, I’ve also added pineapple juice to round off the flavor. It tastes very much like home. Actually this entire weekend has been like a trip down memory lane for my taste buds.

A good curry starts with a good base. Pounding the spice in a mortar and pestle releases the flavors and meld them together better than blending it with a blender. When possible, try to pound your spice instead of blitzing them. There’s more love when you hand pound your spices. 😉

***If you wonder why there are carrots in the gulai, the pictures are showing you the vegetarian version of the gulai during cooking period. The spices are exactly the same. Oh, this is also P’s first experience eating proper Nyonya food too.

I’ve also made some onde-onde, a cousin to the mochi but it’s coated with grated coconut and stuffed with palm sugar that bursts in your mouth with sweetness. It possibly my favorite childhood Nyonya kueh, a Malaysian tea time snack. That recipe will come next!

Today, I would like to share with you a curious method of preparing chicken that at a glance would seem like a case of food poisoning waiting to happen. But, it’s been done a gazillion times before by cooks like my maternal grandmother, who is half Hainanese anyway. She got this recipe from her grandmother.

You will never say boiled chicken is boring ever again after you try this recipe. The chicken is perfectly cooked through, soft, luscious and of course, delicious to eat. This is something that my mother would even make on a regular basis for dinner because it’s so easy. I am sure all of you would agree that most Chinese cuisine’s preparation time is always a drag. Long and tedious. But this is an exception to that. The only catch is you would need to plan this a little bit ahead of time, about 2 hrs ahead of time if your chicken is fresh and defrosted.

I did not make the rice to go with my chicken because I didn’t feel like having rice with the meal, strange as it sounds. But the recipe for the rice is below, for those of you who want to try the complete Hainanese-style Chicken Rice meal. Oh and before I forget, the chicken is usually served in room temperature.

So let’s get cooking.

Enough water to cover a whole chicken in a very large pot.

You are doing good. Now, this is the ridiculous part. Turn off the heat completely and leave the chicken in for 1.5 hours. Do not open the lid, do not stir, do not shake, do nothing. Go read a book or shoot some zombies on your XBOX.

I like to give it a cold bath to stop the cooking completely and also to give its skin a very smooth and luscious texture. Cooling the chicken like this makes it easier to handle while you cut it up for serving. I leave it in the cold bath for about 10minutes

To serve, my grandmother usually prepares a yummy sauce filled with herbs to go with this chicken; I will too because I can’t get enough of it. It goes extremely well with the chicken and with rice.

Recipe for sauce and authentic Hainanese-style rice below.

If you don’t have a rice cooker, you can also cook this in a pot. Just make sure you lower the heat to a simmer/low when the rice starts boiling. Cook for 10 minutes or until all liquid is absorbed and turn off the heat completely. Wait 5 minutes before serving the rice.

The left over cooking liquid from the chicken makes a good soup base to go with the meal. Add some carrots, shitake mushrooms, Chinese cabbage and/or other root vegetables you like to eat and it’ll be a great accompaniment to the Hainanese-style Chicken Rice meal. 🙂 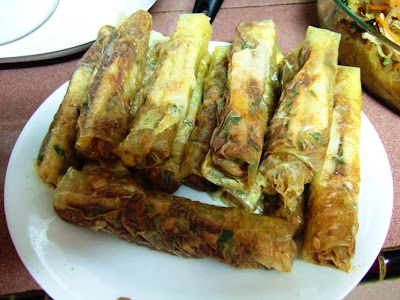 During Chinese New Year, I almost died from eating so much food! Well, not literally. It was a lot of food. But first, I am gonna share with you a very delicious Lor Bak recipe from my grandaunt. She’s a pro when it comes to making Nyonya fares, after my grandmother (who is the guru) passed on, we go to her sister for great Nyonya fare.

Usually, the reunion dinner is special because we’d have Lor Bak (meat with five spice spring roll), Joo Hoo Char (dried cuttlefish with jicama stirfry), Sio Bak, Sio Ark, Sio Keh (roast pork, roast duck, roast chicken all in that order), Nyonya Chicken Curry, Hu Peow soup (fish maw soup), fresh steamed fish, loh hon chai and several other dishes that is varied every year. But the ones listed above is a staple during our reunion dinner. I know it’s a lot even for 12-15 people.

So during my CNY reunion dinner with my family, we had steamboat (hotpot) and Lor Bak on the sides while we waited for the soup to boil. I made it using a recipe that’s age old in our family and while it didn’t actually LOOK like my grandma’s Lor Bak, it sure tasted like it. One reason why it didn’t look like the original is because I didn’t wrap it tight enough. Pfft.

But here’s the recipe for Lor Bak:
Originally, people use pork as the filling but my grandmother and grandaunt switched to chicken decades ago for health reasons. I’m used to the chicken version but you can go ahead and use pork tenderloins in replacement 🙂

Bean curd skins, cut into 5×4 inch squares (for wrapping), you would need about 20 sheets.

Method:
1. Heat oil until it is 300 degrees Fahrenheit. I prefer this temperature because the meat cooks as the spring roll turns golden brown evenly.
2. In a large bowl, combine ALL of the ingredients above except for the bean curd skins. Mix well. Let the chicken marinade for about 15-30 minutes.
3. With 1 sheet of bean curd skin, put in 2-3 fillet of chicken with a bit of the ingredients from the marinade. Wrap as you would a spring roll and be extra careful to roll it tightly so it doesn’t open up while frying. To keep the bean curd skin together after rolling in the filling, dab your fingers in the marinate from the bowl and wet the ends of the bean curd sheet before sealing it off.
4. Repeat step 3 until all the filling is used up.
5. Deep fry the Lor Bak until it becomes crispy golden brown.
6. Let it cool a little bit before cutting.