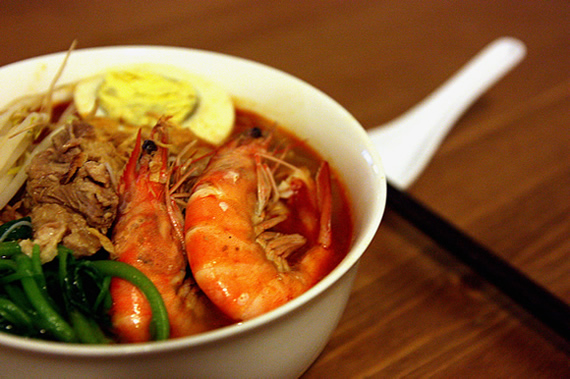 The most time consuming part of cooking Penang Prawn Mee is the broth, it’s an element that will either make or break the dish so take the time to clean the pork bones and use the freshes prawns you can get. You need A LOT of prawns/shrimps for this dish. Usually, I would used 1500 grams worth of shrimp shells and 700 grams of pork bones for 1.5 liters of broth. If you cannot get as much shrimp shells, you should get a sachet of Tean’s Gourmet Prawn Noodle Paste from your Asian grocery store for a bit of help in boosting the flavour of your broth. You may use other brands but I won’t be able to guarantee how the flavours will turn out. END_OF_DOCUMENT_TOKEN_TO_BE_REPLACED

Remember a few posts back, I was posting a bunch of Malaysian recipes because I was having a ginormous Penang food cookout at home? This is one of those recipes and the last of the recipes from that event. Otak-otak is a Malaysian fish custard steamed with a spice paste wrapped in banana leaves. The type of fish used are usually white meat and firmer so they do not fall apart too easily; monkfish, halibut, cod, seabass and the likes. There are also variations of this recipe using other types of seafood – this is one of those variations using shrimps.

The spicy custard is key in making this delicious and also a certain kind of leafy herb called Daun Kadok or Piper sarmentosum. The locals in Malaysia sometimes substitute this herb for mint leaves because Daun Kadok has a rather minty profile but by substituting it with mint leaves, the minty profile is pretty much all you get because Daun Kadok also has a lemongrass and a green herbaceous profile that cannot be replicated. But in the event that you could not find this herb, go ahead and use mint. It would still be pretty good.

So, the French have their pates and terrines, the Malaysian have their Otak-otak and it is absolutely delicious to eat when spread on toasts, crackers and even with a steamy hot bowl of rice. To make otak-otak, there are basically three steps 1) POUND 2) ASSEMBLE 3) STEAM – and on we go.

It’s ready to eat with some rice or with a slice of toasted baguette. Mmmm….

I made otak-otak before 3 years ago but this is definitely the better version. I gather it’s because I put a lot of love into it. 🙂

Vegetarians – you can omit the fish paste in the custard and also substitute shrimp with medium soft tofu. It is equally delicious.

Taro cake has never really been a favorite snack of mine. I didn’t hate it nor was I extremely crazy about it back in Malaysia but recently, I’ve been craving for a plate of diagonally cut taro cakes topped with dried shrimps, fried onions doused in sweet and spicy sauce. It’s like one of those things that’s innately sitting inside the Malaysian side of me and god knows, what else is there? I wasn’t big on durians either back in Malaysia.

So, to satisfy my Malaysian craving of the tuberous kind in the form of a kueh I’ve decided to make some. It’s surprisingly easy to make, you just need to buy some taro root. For those of you in the US, or some parts of Canada, I think you call the taro root yam, which can be confusing because it’s two different root vegetables. In case there are any confusions the picture below will give you a good idea what a taro root looks like.

You can treat this taro cake as an appetizer or even as a meal in itself because it can be quite filling! Here’s a recipe I took from this book Nonya Flavors: The Complete Guide to Straits Chinese Cuisine, which was a gift from my dad. A lot of the recipes in that book is pretty authentic but some are a bit different from what I remember but that’s just because of personal preference from how my late-grandmother made some of the dishes. I highly recommend you get a copy of this recipe book if you ever encounter it, here’s a link to a Malaysian bookshop who will ship it overseas if you order it from them. Other Nyonya cuisine cookbooks.

And on to the recipe!
* Vegetarians: You can easily make this into a vegetarian dish by omitting the dried shrimps. It is just as tasty!

Eat with a cup of coffee or your milk tea – my favorite combination of all time!

And a week or two later, the onde-onde recipe is finally here!

Onde-onde is a sweet rice dumpling that most Malaysians enjoy as a part of their tea time snack. I’m not very sure what its origins were, but onde-onde is a must as part of Malaysian tea time snacks. It is probably my favorite form of sweets and it has been a long time since I’ve had any of these soft, chewy green bursting balls of coconuty goodness. MMm!

I never thought I would miss palm sugar. Making onde-onde at home in Montreal, the land of poutine and Schwartz’s smoked meat, it cannot get any better than this. The sweet pop of palm sugary sweetness from this sweet dumpling was just too much to bear, too nostalgic, too good. And it’s an easy recipe to make too, I’m not sure if that’s a good or bad thing but before I digress –

200grams of glutinous rice flour
100 grams of ruby sweet potatoes, peeled and steamed till soft
1 tablespoon of pandan leaves extract, mixed with 200ml of water to make juice
a pinch of salt
150 grams of palm sugar, chipped into small 1/4 inch pieces – try to get those darker ones but the Thai palm sugar would work just fine too
2 cups of grated unsweetened coconut