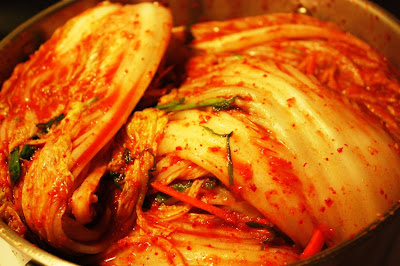 I’ve been making my own kimchi since the start of this blog. The recipe I’ve been using has served it purpose of satisfying my cravings but it is far from authentic. What I mean by that is that the method used to preserved kimchi from this site is far from how it is traditionally done in Korea. Granted, I know many koreans who live overseas make-do with what they have. See previous kimchi recipe here – but I promise, this one new one is 100times better.

Recently, I’ve discovered this incredible Korean lady who cooks incredible korean fares on her blog, Maangchi.com 🙂 And her kimchi recipe is the closest thing to the original method of making kimchi. I saw Anthony Bourdain’s No Reservation: Korea and saw the whole kimchi making process – let me just say it is not as simple as just sprinkling chili powder on cabbages.

There is a thin roux-like base made from glutinous rice flour that needs to be prepared for the kimchi paste in which it would be used to bath the Chinese cabbage after it’s been salted. It’s the red chili goo you see Korean women smearing on vegetables before tucking the vegetables into clay barrels. The kimchi recipe I used called for me to chop the cabbages into 1 inch pieces first but apparently, according to my friend who lives with a Korean girl, this type of kimchi is considered low-grade kimchi as good kimchi comes in whole-halved (or quartered) cabbages – each leaf is stuffed with the kimchi paste. But for convenience say, you can definitely chop them into pieces, the flavour is largely unaffected. You just need to salt for less time. 🙂

Thanks to Maangchi, i have found the recipe for kimchi paste and it worked magnificently. In fact, it is better than the recipe I had tried before.

This is what I used: 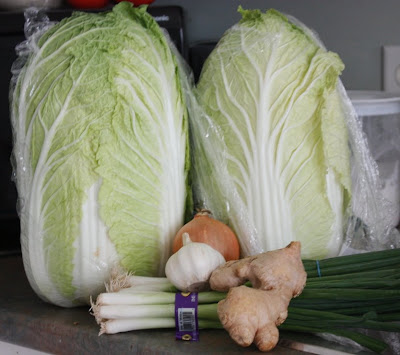 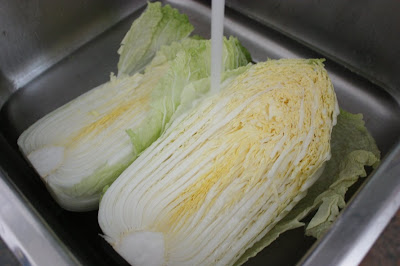 1. Wash and cut your Chinese cabbage length-wise into quarters, after that give these quartered cabbages a quick bath in water. It would help rinse out impurities from within the leaves and also help the salt to stick later on. 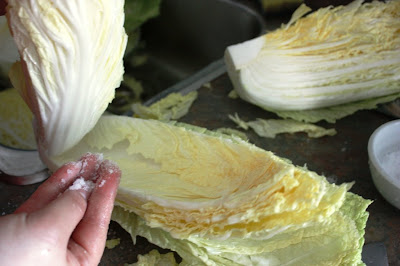 2. Peel each leaf from a quarter of the cabbage and sprinkle salt from the stem to the leaves of the cabbage. Put more salt on the stem as they are thicker. Repeat this for each leafy layer and until ALL the cabbages are salted. Leave them in a plugged basin and let the osmosis work its way through the cabbages for 4 hours. At the end of the 2nd hour, your cabbages should be quite wilted and water would have seeped out of the vegetable; now turn each cabbage quarter over and let them sit in their salty brine for the rest of hours. 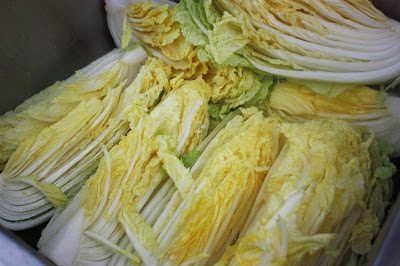 3. While your cabbage is being salted to get rid of excess water, you can start making your kimchi paste. Combine glutinous rice flour and water in a pot and bring to a boil. Stir constantly and you will have a concoction that is similar to rice congee. When it is thick like that, turn off the heat and you can go to the next step. 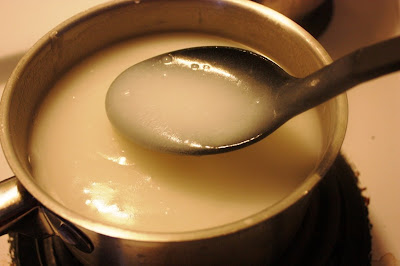 4. Add the fish sauce, and sugar, and stir to combine well, now you can add your chili powder in. Stir to mix the red paste into a nice amalgamated thick sauce. 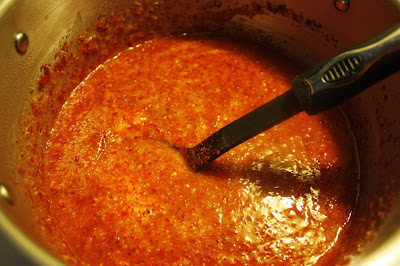 5. In a food processor, add your ginger, garlic and onion and blitz until you get a nice paste. Add this into the red chili concoction and mix again. Once that is done, add the rest of the vegetables in and combine well. Now is the time to add your fresh oysters if you are using them. Mix well and your kimchi paste is done. 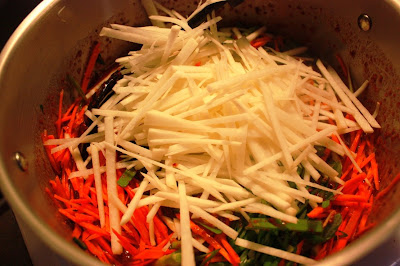 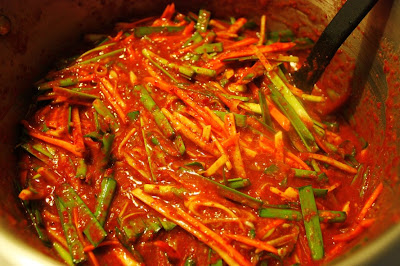 6. Your cabbage should have shrunk in size considerably by now and this step is rather important if you don’t want to have an overly salty kimchi. You need to rinse the cabbage quarters 3 times to get rid of excess salt. Remember to squeeze all excess water out. Once this is done, you can move on to the next step where you spread the kimchi paste on each leaf of the cabbage. 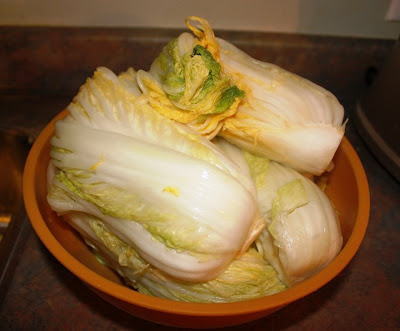 7. Using your hands is vital in making good kimchi and there is really no other way to it. So with one hand peeling a leaf of cabbage and the other grabbing a handful of kimchi paste, smear the red paste on each leaf and repeat until ALL your cabbages are used. 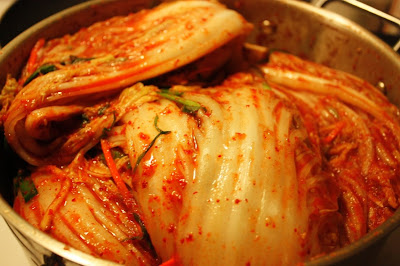 Now, you can store your kimchi in containers and leave them in room temperature for 2 days until they ferment. You will know when your kimchi is fermented when it emits a sourish smell and maybe a fizzle can be hear when you open up the container to check 🙂 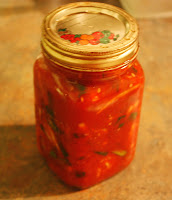 ** if you have extra kimchi paste, store them in a bottle and use them as you would to season broths. Or make kakdugi, which is kimchi made from cubed daikon radish.
I tried eating kimchi freshly made as suggested by Maangchi and thought it was absolutely refreshing. But I still like the sourish taste of fermented kimchi more because I like sourish foods 🙂

You must give this recipe a try if you are a kimchi lover because once you know how to make your own kimchi, you never want to go store-bought again. And plus, as I have said previously, kimchi is incredibly versatile and tastes awesome in stir fries. But with my kimchi, I’ve made this: 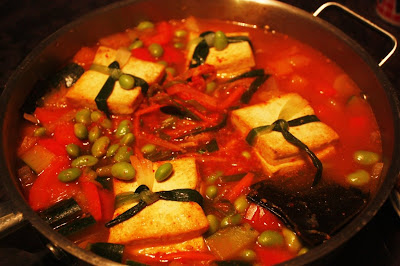 Thank you so much for this! I love Kimchi and I’m going to try this – how long can it keep after fermentation? I assume it then goes into the fridge. Also, are there any containers you would recommend to keep them in? e.g. glass and how did you find any to fit the size of the whole cabbage!

pink parisian: You’re welcome! And it does seem like I have missed out some minor detail like storage. I would recommend storing kimchi in a large tupperware. I keep one and a half chinese cabbage in to a 11x8x3 inch, and it fits just fine. If you don’t have such a big storage space, just get smaller chinese cabbages for this.

Kimchi can keep for a very, very, very long time after fermentation, if stored in the fridge. I’d go as far as say that it would last 6 months without it going bad and perhaps more. Let me know how your kimchi turn out and good luck 🙂

Oh wow. Thanks for this… for telling me the authentic way to make it. =)

Of course, am not saying we’ll be able to do this in the very near future… but it’s on the to-do list. =)

I JUST finished my jar of kimchi. I think I’m going to try to make my own instead of buying another jar. I’m excited!

eatingclub: I look forward to seeing it on your blog soon js 🙂 You can get korean chili from any asian grocery store and plus since you’re in Vancouver, it’s going to be easy to find 🙂

Its a pretty good and easy way to make Kimchi. Where do u get the Korean chili powder in penang?

Bryan: You can get Korean chili powder from the Korean food fair. But I think the one held in Gurney Plaza, Penang happened on the 9th to 13th of October 2008. So, my best bet would be to look into Cold Storage at Gurney Plaza for some Korean kimchi powder. They should have an Japanese/Korean section there.

They say kimchi is equivalent to a mother’s love cos of constant stroking of the leaves with the paste. 😀

tigerfish: No wonder I always feel so comforted making and eating my own kimchi. It reminds me of my mom 😀

Dear Elaine.. is it ok if i use the normal chilli powder sold in the supermarket if i dont have korean chilli powder?

Hey, I was just wondering with the left over kimchi paste, can I use it to fill up the rest of the container instead of storing it away, or will the excess kimchi paste make the kimchi salty?

Hi Khanh, You could use to fill up the rest of the container if there's a bit of the kimchi paste left. I usually have about 1 cup of paste left after I spread on the cabbage so what i do is I keep the remainder of the kimchi paste in a jar and use it for cooking. It's great as an instant soup flavoring or as seasoning for fried rice. 🙂